Now, if you're interested in going BIG and starting your very own server network like Hypixel and Mineplex then you've come to the right place! Server networks are a great option if you have multiple gamemodes and games running on your server and you'd like to balance the load out between multiple PC's. There are a few benefits to doing this:Decreased lag / load times for playersThe option to have multiple servers in different locations to optimise the player experienceThe ability to handle more players at the same timeThe thing we'll use to setup a server network is a piece of software called Bungeecord or 'Bungee' for short! Bungeecord basically acts as a proxy server that isn't a Minecraft server in itself, but it gives the power to allow you to hop from one server to another through the Bungeecord server itself. Here's a short diagram that may make it easier to understand for you: 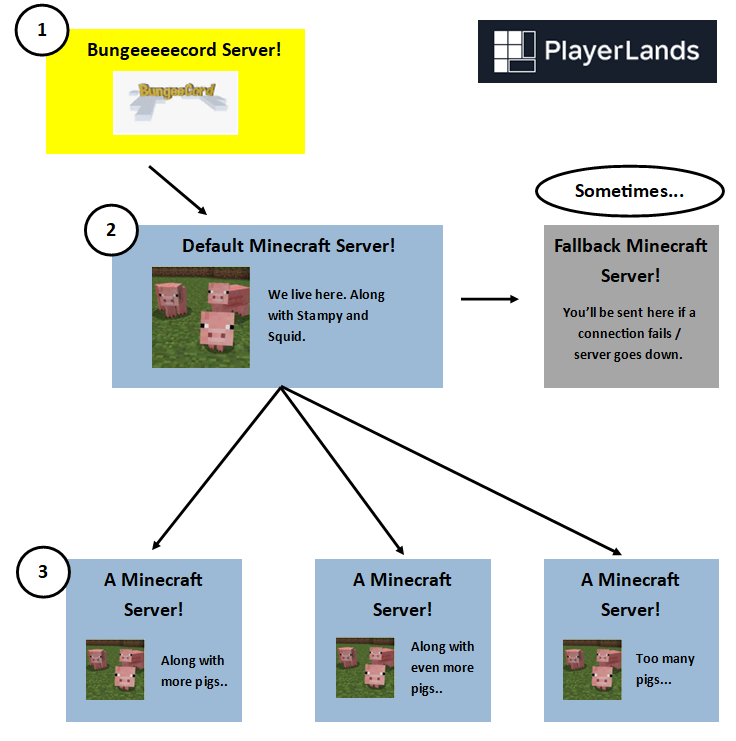 So, as you can see, Bungee isn't a Minecraft server on it's own; it can only forward players to another server that is (like a Spigot server for example). Think of it as a tunnel that you connect to and go through and it can take you to multiple different places. That's basically what Bungeecord is. Anyway, enough about the quantum physics of Bungee, lets get it setup!1) Get Bungeecord up and running!Bungeecord only requires 1GB RAM to run normally, as it's not a normal Minecraft server!Just a quick note! This guide is only helpful really if you're self-hosting (that means the server is hosted on your own PC / hardware) If you use a server hosting company, then please enquire with them about getting a Bungeecord server up and running. Most of the time they'll even set it up for you for a small fee too!First, you'll need to get a Bungee instance up and running, to do this simply follow this guide from Step 2 until the Fourth point. After the fourth point, continue back to this guide! Instead of completing step 5 and getting Spigot installed, we're going to go the other way and use BukkitGUI to get Bungee running!Second, now you'll need to download the Bungee JAR file from here! (select Bungeecord.jar from the list and it'll download!) then move the file into wherever the BukkitGUI exe file is and finally in BukkitGUI under the Superstart tab where it says "JAR File" simply put the name of the Bungeecord JAR file (by default this should be "BungeeCord.jar")2) Setup BungeecordYou'll now need to setup Bungeecord, basically this means you need to tell it where to forward your players to! If you don't set this up then your players will go nowhere when connecting to your Bungee server!First, go to the general tab on BukkitGUI and press Start to startup your server! It should start up sucessfully, then stop the server. If it doesn't startup at all, that's okay! All we've done here is generated the files we need to edit to get everything working properly.To edit text files (such as yml files), I recommend downloading Notepad++ as it will make your life easier!Second, go to wherever your server files are stored, then double-click to edit the config.yml - this is where we can define which server IP / Port the user will actually be connected to when connecting to our Bungee server. In the config.yml, go to the "servers:" section and there you'll find where you can add all your different servers, IP's and ports. Bungee will automatically forward the user to whichever server is at the top of the list OR has the force_default_server option set to true.Third, you'll need to set your destination server (the one you want Bungee to forward your user(s) to) to offline mode! Bungeecord handles user authentication on it's own, so any destination servers must be set to offline mode for the connection to work! To set a server to offline mode, simply edit the server.properties file of the destination server to: "online-mode=false" - you'll also need to set "bungeecord=true" if your destination server is Spigot as well (which ideally, it should be!).Fourth, restart your Bungeecord and destination servers and try to connect using the IP / Port of your Bungeecord server. You should now be able to connect to your Bungeecord server's IP / Port and be connected to your destination server! If you have any problems, then the Spigot Discord is a great place to go for some help.You may need to port-forward your Bungeecord server in order to connect to it from an external network. There's more on that here!

Was this article helpful?